We look forward to welcoming you.

Located in the town of Tornac near Anduze, the hamlet of Barbusse is a peaceful place, an old Provencal farmhouse dating from the 17th century, completely renovated and which is still changing.

This house on two floors with a roof top awaits you in a hamlet in the middle of nature on the hillside with a view of the vineyards and the hills. You can hear the river flowing nearby. A three-minute walk away, there is a "gour" where you can swim. You can walk or go mountain biking in the middle of this typically Provençal and Cévennes landscape.

The house consists of three bedrooms of approximately 15m2, each with a double bed, two bathrooms, a large dining room with its open kitchen of 35m2 and a small TV area. A 45m2 roof terrace offers a view of the entire valley with its grill area, table and lounge. A large natural swimming pool 25 m long next to the gîte with a waterfall and its terrace. 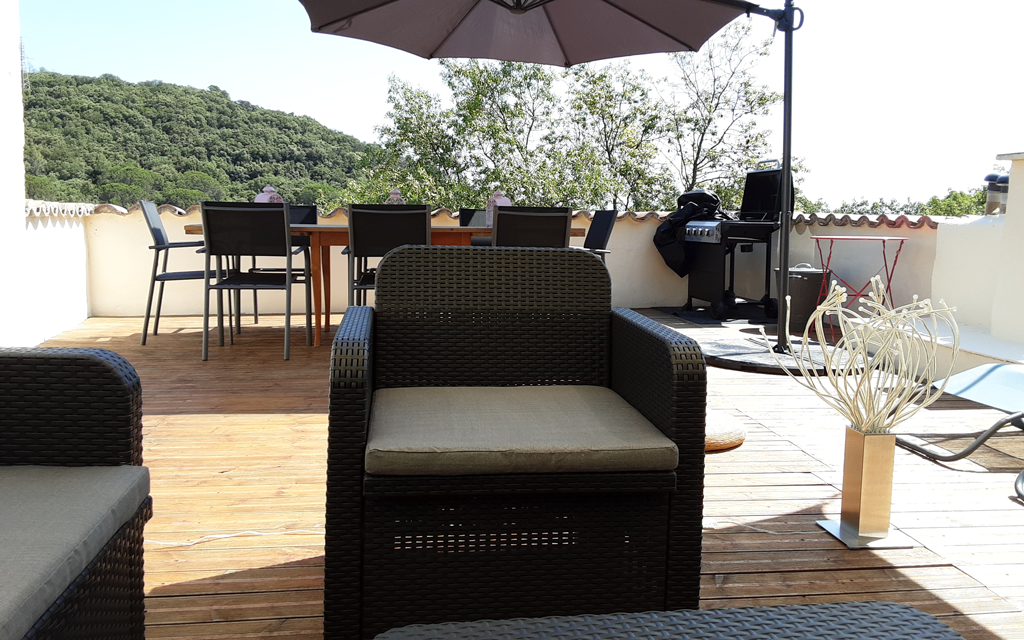 Our farmhouse is located 1h15 from the sea, 1h from Montpellier or the Camargue, 50 minutes from Pont-du-Gard, 45 minutes from Nîmes or Uzès, 20 minutes from Alès and 5 minutes from Anduze . We are located at the foot of the Cévennes mountains and in ten minutes you will start to climb its flans where you will find St-Jean-du-Gard at 25 minutes and Millau at 2 hours.

There are many activities available to you in this region.


For young and old


• Swimming in the surrounding rivers.
• In Anduze, children's park with inflatable castles as well as water games, swimming pools, adventure course in the trees, laser-game.
• The little steam train that will take you from Anduze in the Cévennes to St-Jean-du-Gard.
• There are multiple caves to visit within a half hour drive.


• The castle of Tornac
• La Bambouseraie, a very pleasant and shaded park where you can walk among hundreds of different kinds of bamboo. Exotic.
• The region is ideal for walks; on foot or by bike. And for all genres! Short or long, sporty or quiet. The Cévennes mountains also offer magnificent views of the garrigue, such as the Cirque de Navacelle or Mont-Aigual.
• But also several museums on the history of the region; the cradle of French silk and a center of Protestant resistance following the revocation of the Edict of Nantes.
• The Pont du Gard, this impressive Roman aqueduct.

Several beautiful villages are worth visiting

• Anduze, its alleys, its various markets in summer, its pottery, also represents the starting point for multiple excursions.
• Sauve et Vézenobres: typical villages on the mountainside.
• The small villages of the Cévennes.
• Uzès and its market, a tourist village but magnificent.
• Nîmes and its famous arenas, its Roman historic center and its museums.
• Montpellier, its pedestrian area and its shops.
• The Sainte-Marie de la Mer: its fortified town and the Camargue around it. .